Home  /  Incident at Our Lady of Perpetual Help 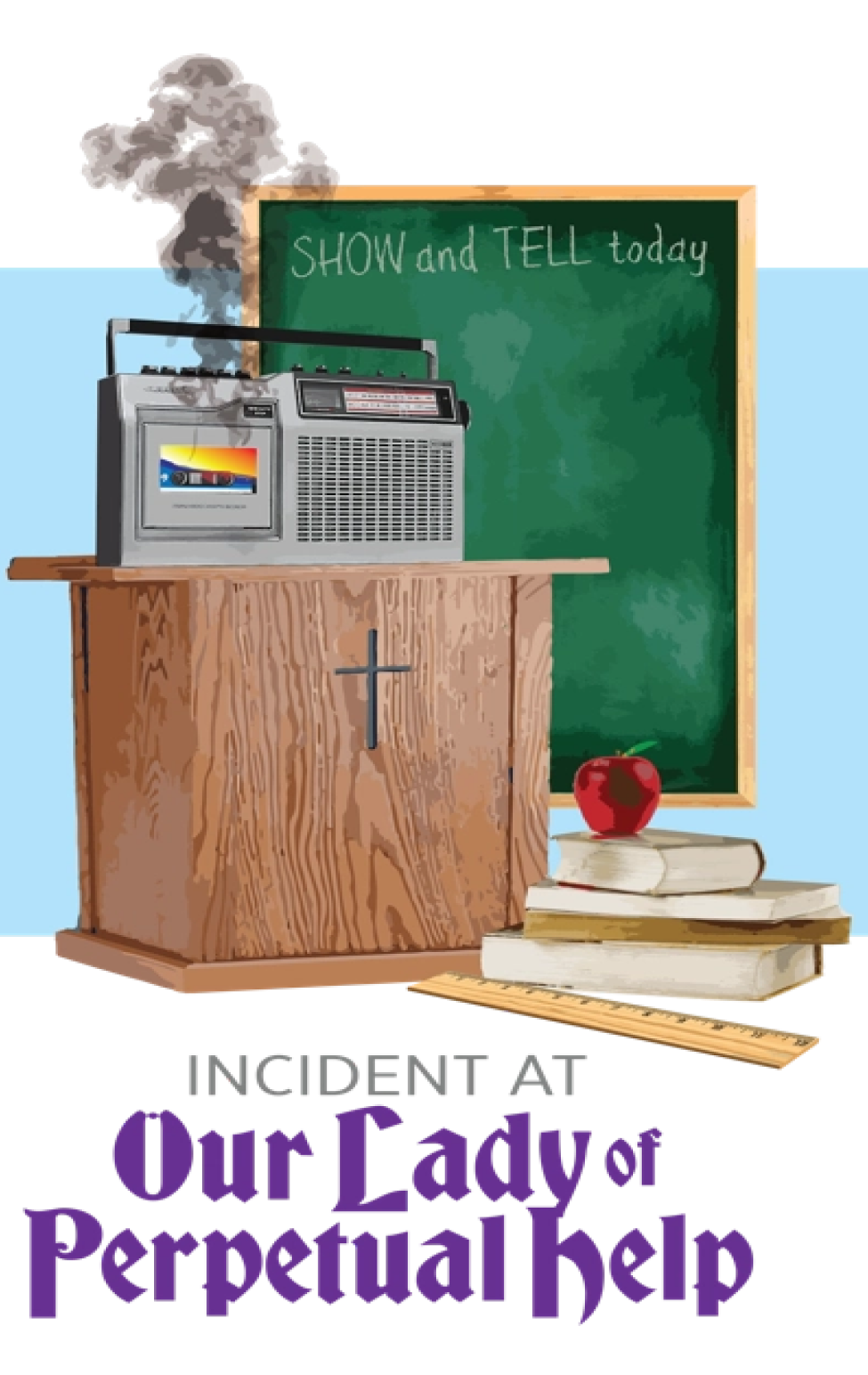 Incident at Our Lady of Perpetual Help

A conversation about the birds and the bees creates a school scandal.

A money-strapped family tries to cope in 1973. 19 year-old Linda O’Shea is our narrator and she is attempting to re-enact the most turbulent day of her life, but her family keeps interrupting to tell their side of the story. The 70’s were a time of old school living; no social media, and public ridicule in a close-knit community was the ultimate nightmare. When her parents ask her to explain to her younger sister about the birds and the bees, somehow the blunt explanation is overheard by the parish priest and he is not amused. When he confronts her parents about the “corruption of their eldest daughter’s very soul,” all holy hell and hysteria break loose in this nostalgic comedy.

Incident at Our Lady of Perpetual Help was subsequently produced at the Cincinnati Playhouse in the Park, Blake Robison, Artistic Director, Buzz Ward, Managing Director.

Place: Our Lady of Perpetual Help Parish and the O'Shea Kitchen 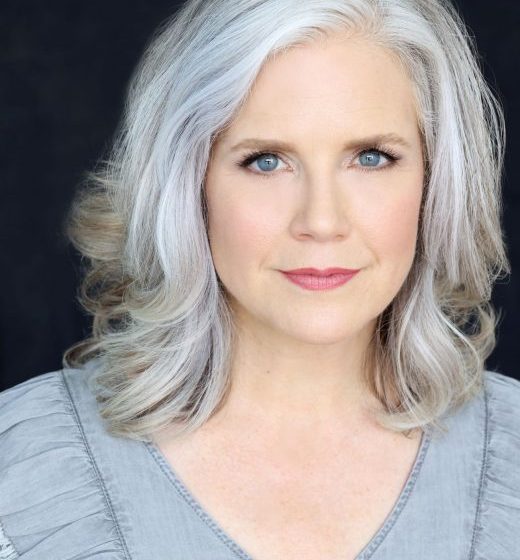 CHRISTINE BRUNNER returns to the stage after the long pandemic-induced arts hibernation.  Previously with HRTC: Permanent Collection, A Christmas Carol, Steel Magnolias, Romeo and Juliet (in-school tour) and the live-recorded Radio Drama Adventures In Time.  Feature Film:  Adeline, Who is Amos Otis?, Bloodstock.  Christine is a veteran Voiceover Artist, union Hand Model and busy commercial actor, works as a professional Dialect Coach to schools and theatre groups, and as a private Acting Coach to students ages 9-59.  Christine is thankful for the continued love and support from her artsy daughter and composer husband, and dedicates this performance to her ACTUAL, wonderfully dysfunctional, Irish Catholic family. 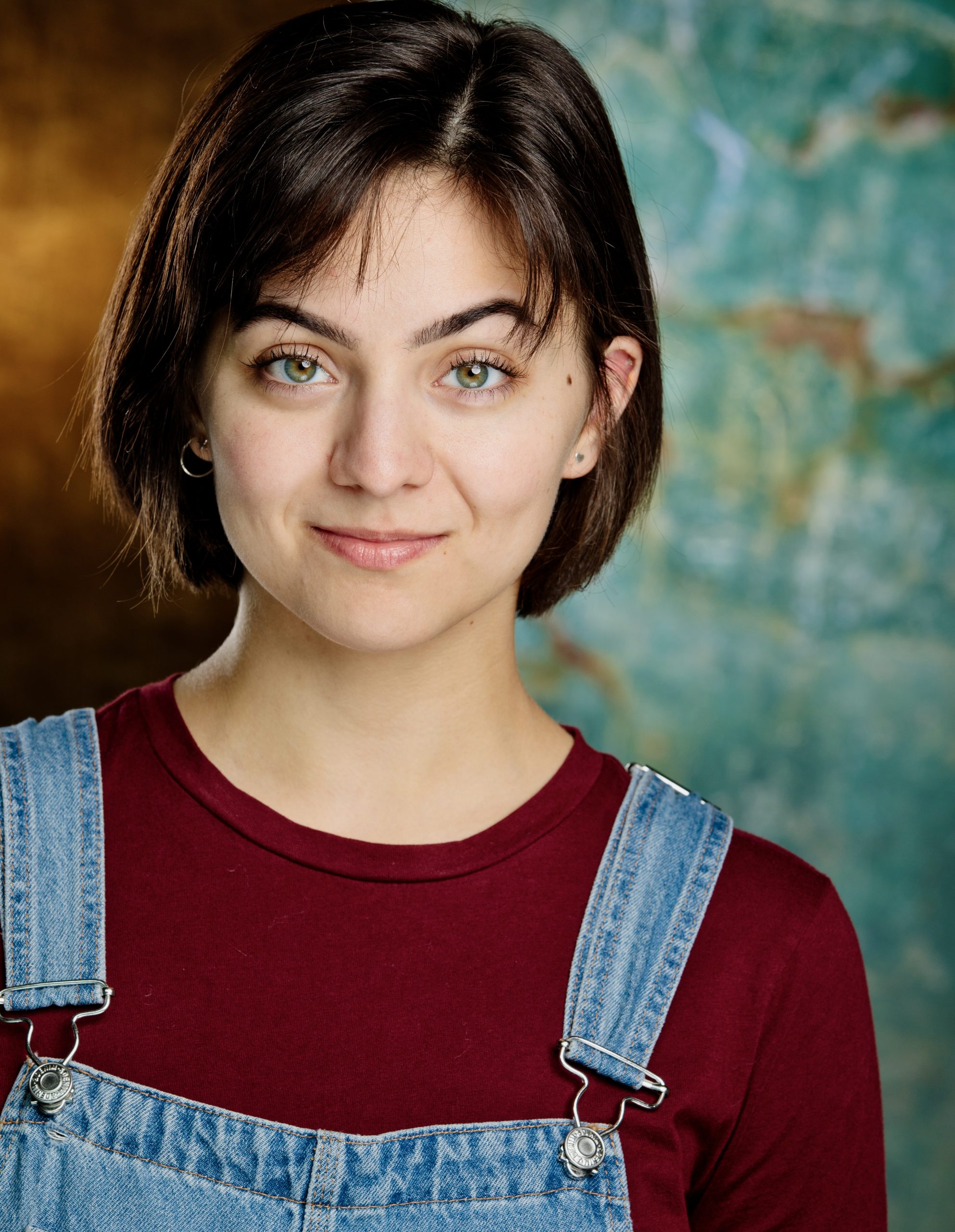 CECILY DOWD is a recent graduate of the Conservatory of Theatre Arts at Webster University with a degree in musical theatre. Although now based out of Los Angeles, they had a number of credits in Dayton throughout high school, including One Slight Hitch with HRTC as P.B. Coleman. Other credits through college/summer stock include Hope Cladwell in Urinetown, Katherine Plumber in Newsies, #2 in the wolves with the St. Louis Rep., and various short films rendering their release. Beyond grateful to be back at the Human Race, they hope you enjoy the show!  Instagram: @cecily_dowd    Website: www.cecilydowd.com 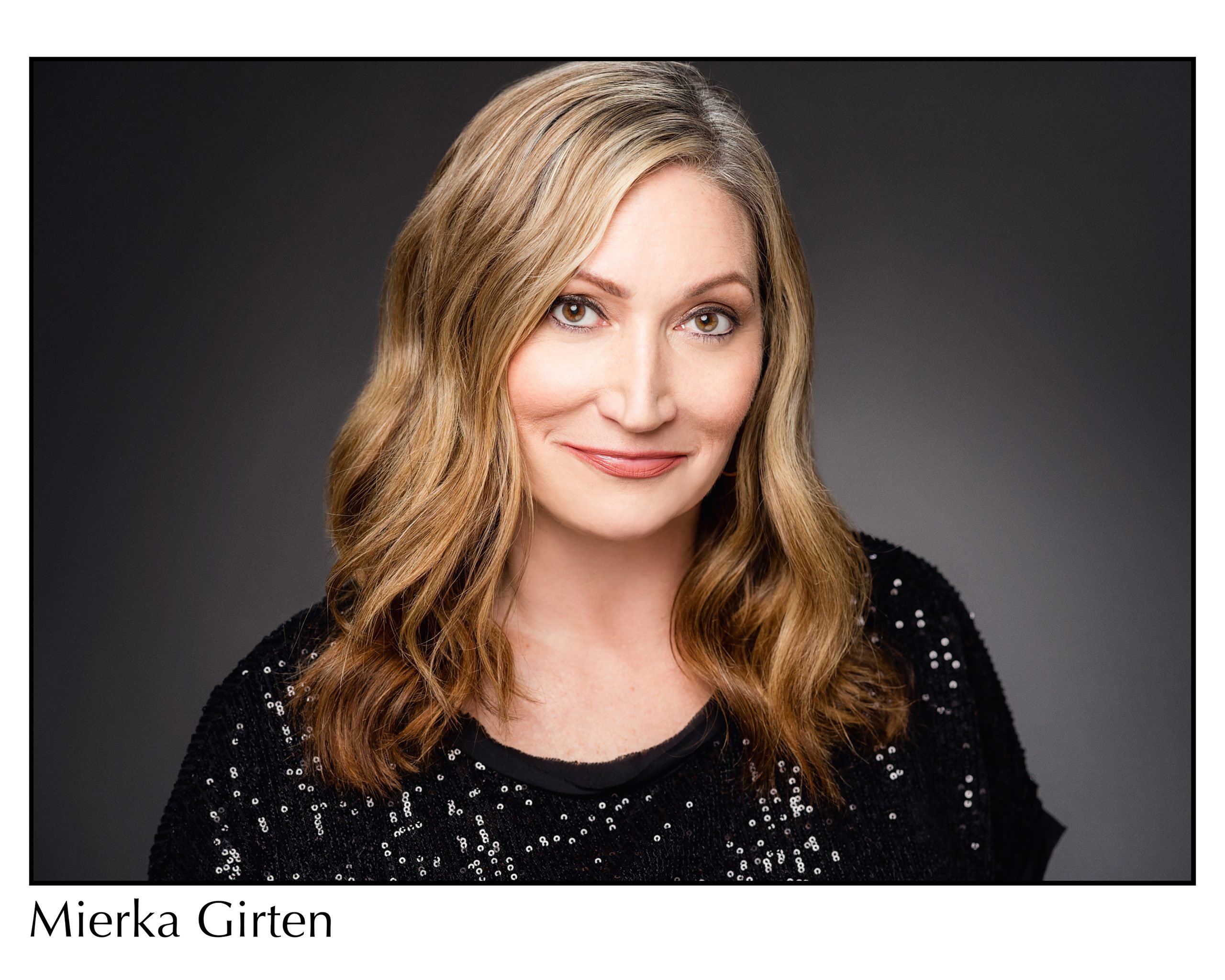 MIERKA GIRTEN is thrilled to return to The Human Race Theatre. Dayton audiences have seen Mierka as Maria Callas in Master Class, Audrey in Little Shop of Horrors and Tina Turner and Leslie Gore in Beehive among many others. For the last 20+ years, she has made Chicago her home as an actress, casting director and producer, where she is an ensemble member with award winning A Red Orchid Theatre. Some of her favorite productions have included Sweat at The Goodman, Into the Woods at Porchlight Theatre, The Walls at Rivendell Theatre Ensemble, her one woman show With or Without Wings with Baum House, Gloria at McCarter Theatre Center with Mary McDonald as well as Simpatico and Mistakes Were Made with Michael Shannon. Mierka had the rare opportunity to be seen on the first episode of Anthony Bourdain: Parts Unknown. Additionally, she has been doing voice over work for regional and national brands for the past 25 years. Mierka is a graduate of Wright State University, Cincinnati’s School for Creative and Performing Arts and a proud member of Actors’ Equity Association. 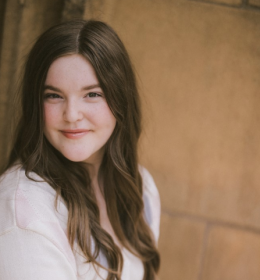 LIZZIE HUELSKAMP is excited to be making her Human Race Theatre debut! When she’s not watching Bogart and Bacall movies, Lizzie can usually be found in the BalletMet studios, where she trains in ballet, tap, and jazz five days a week. Favorite acting credits include: Annie (Annie, City of Columbus), Ariel (Little Mermaid, Star Performance), Dickon (Secret Garden, Actor’s Theatre/Columbus Children’s Theatre), Esther Jane (A Christmas Story, Weathervane Playhouse) and Jo (The Show Must Go On, Broadway Workshop/Taylor Louderman). Favorite concert credits include Celebration of Music (PBS), Sondheim Stories (Broadway Kids Auditions) and A Very BAA Christmas (Broadway Artists Alliance). Lizzie would like to acknowledge all of her friends, family and teachers for their constant support. She would also like to thank the entire cast, crew and directors of The Human Race Theatre Company, as well as you, the audience for supporting live theatre!  Here’s looking at you, Sweethearts!! 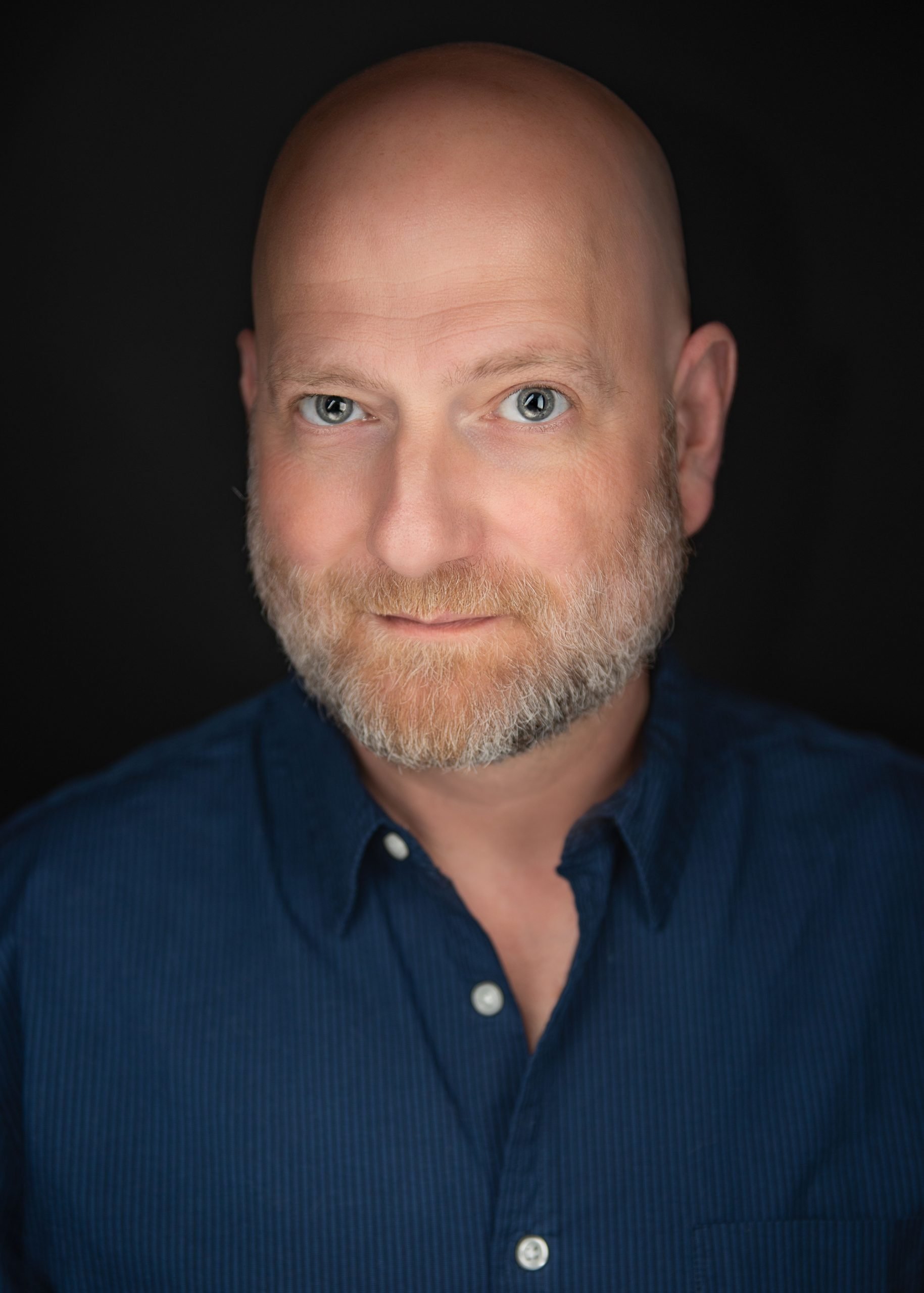 JASON PODPLESKY is thrilled to be back at The Human Race Theatre, having previously been in Sylvia, 26 Pebbles, and Becky’s New Car. In New York, he has worked with The Flea Theater, The Classical Theatre of Harlem, Manhattan Theatre Source, The Public Theatre, and MCC Theater. Regionally, his credits include CATCO, Cincinnati Playhouse in the Park, The Know Theatre of Cincinnati, and Concert:Nova. Jason can also be seen in the films Christmas Collision and Western World. He holds an MFA from the University of Cincinnati, College-Conservatory of Music and a BFA from Otterbein University. Jason is currently an adjunct professor at Wright State University and Sinclair Community College.

JULIAN CROCAMO is a composer, audio engineer and sound designer based in Ithaca, NY, where his work has recently appeared at The Kitchen Theatre Company (The Thanksgiving Play). Other credits include work with Boston’s Brown Box Theatre Project (Measure for Measure) and The Huntington Theatre’s audio plays (Sherlock in the Fog). Julian also writes and releases music under various names, and is grateful to both Margarett Perry and The Human Race Theatre Company for his first opportunity to work ‘abroad’ since the pandemic.

Jacquelyn is delighted to be halfway through her fifth season with HRTC! Jacquelyn received her BFA in Theatre Design & Technology with an emphasis in Stage Management from Wright State University. During her collegiate years, Jacquelyn had the pleasure of working for Adam Pascal, Jason Robert Brown, and Tom Hanks. Her first show with HRTC was Hail Mary! back in October 2016. After nine consecutive shows as the Production Assistant, Jacquelyn was promoted to Production Stage Manager in Spring 2018 during Brighton Beach Memoirs. She is a proud member of Actors’ Equity Association and encourages you all to follow us on social media!

ERIC MOORE is happy to be working with Human Race again. He has a BFA from Wright State University’s Department of Theatre, Dance, and Motion Pictures. His past credits include Scenic Design for The Human Race Theatre’s Looped, An Act of God, Sylvia, Americana Christmas, Sex with Strangers, Hail Mary!, Steel Magnolias and Miracle on South Division Street as well as A Christmas Story the Musical for Columbus Children’s Theater, and Footloose, The Wizard of Oz, and The Music Man with the Springfield Arts Council’s Summer Arts Festival.

MARGARETT PERRY has directed numerous productions at The Human Race Theatre Company including The Revolutionists, The House, God of Carnage, Hail Mary!, One Slight Hitch, Vanya and Sonia and Masha and Spike, Other Desert Cities, Retreat from Moscow, Painting Churches and two world premieres— Michael Slade’s Under a Red Moon and Patricia O’Hara’s Banned from Baseball. She is an award-winning director of new plays and has directed and developed new work Off-Broadway and in regional theatres across the country as well as Scotland and London. Recent favorite projects include:  the world premiere of Born in East Berlin by Rogelio Martinez and the world premiere of Seared by Theresa Rebeck (both at San Francisco Playhouse), Brian Dykstra’s hip hop play, Used to Was (Maybe Did), with Center Theatre Group, A Doll’s House, Part 2 (Hudson Stage) and Shrek the Musical (Connecticut Rep). Margarett was the Resident Director at the Kitchen Theatre in Ithaca where she has directed over 25 productions—including this season’s The Thanksgiving Play. During the shutdown, she ventured into the short film and music video world for passion projects such as #Hashtag That-Say Their Name (from the musical Crazy Make Crazy), This Doesn’t Work written & performed by Darian Dauchan and Brian Dykstra and Time Passes for the Resident Acting Company. She also began exploring watercolor and her work was licensed by the New York Historical Society and was a finalist in 2020 Brush & Lyre Prize.  Margarett is grateful to The Human Race for providing her a creative home to explore, create and grow. Upcoming:  The Golfer by Brian Parks (Assembly Rooms, Edinburgh). Member SDC. www.margarettperry.com

JANET G. POWELL is excited to be returning to HRTC to costume Incident at Our Lady of Perpetual Help. She has costumed several shows for HRTC, which includes most recently, Airness, The Revolutionists, and Now and Then. She has also costumed for Yellow Brick Theatre, Town Hall Theatre, Dayton Playhouse, joint productions for CCM and The Carnegie Visual and Performing Arts Center, Beavercreek Community Theatre, Memorial Hall in Cincinnati, and the original independent production of Soldier Christmas presented at NKU. She was an artistic director/teacher for Norwood City Schools where she designed, directed, and costumed shows for 37 years. She wants to thank her husband and children for their years of support.

JOHN RENSEL is the longtime Resident Lighting Designer for The Human Race Theatre Company, Muse Machine, the Dayton Philharmonic Orchestra Pops series, and the Dayton Opera Association. He also serves as the long-time Technical Director for the Fraze Pavilion and has provided advanced technical production coordination, lighting designs, automation programming, and performance operation services for many artists and productions that have visited that venue. John also has a diverse dance lighting background, having provided lighting designs and technical production services for many years to The Dayton Ballet and Dayton Contemporary Dance Co.  John’s national credits include a lighting design package for a National Touring Production of the Elton John/Tim Rice collaboration Aida.  Some of his most recent local credits include all the designs for The Human Race’s season at the Loft Theatre; Muse Machine’s productions at the Victoria Theatre and the Dayton Opera Association’s season at the Schuster Center.  At 70, John just had his tonsils removed. Ouch!

Three amazing reviews – all saying you must see INCIDENT…! Thanks to Dayton Daily News and League of Cincinnati Theatres.
http://ow.ly/QRyP50IMxsI
http://ow.ly/3gcB50IMxsB
http://ow.ly/VlSM50IMxsF

Production Photos from INCIDENT AT OUR LADY OF PERPETUAL HELP 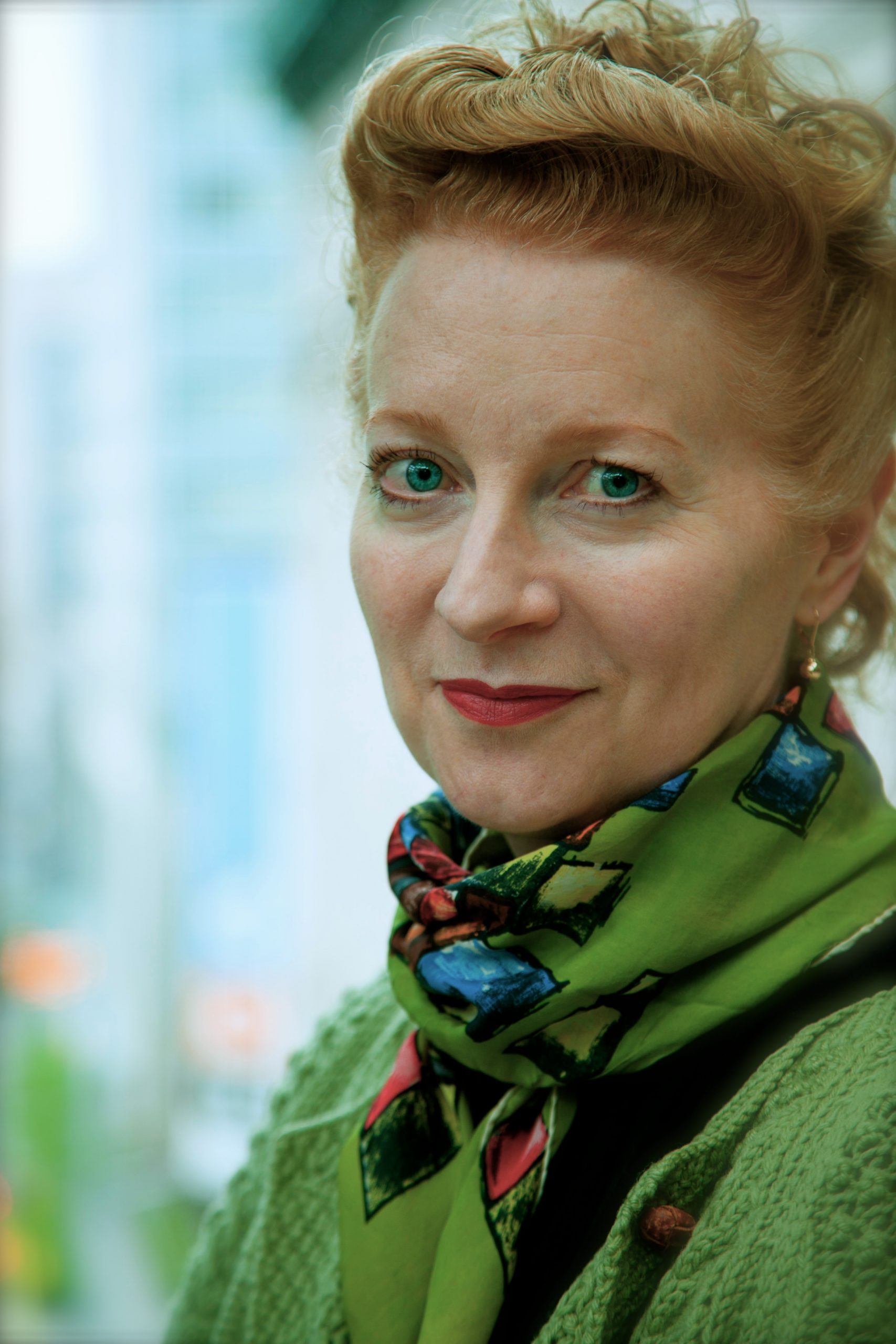 PAY WHAT YOU CAN SPONSOR 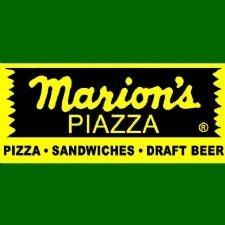